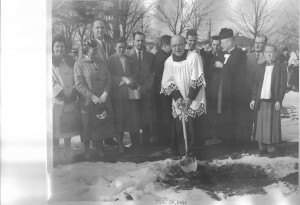 Mother of Divine Providence Parish was created on December 8, 1954, the closing date of the Marian Year, by the late John Cardinal O’Hara, Archbishop of Philadelphia. Reverend James M. McGrory was named as our founding pastor. Fifteen acres of land were purchased to house the new parish. The grounds included a house, which was to serve both as a rectory and temporary church. The first parish Mass was celebrated by Father McGrory on March 6, 1955 on the 2nd floor of the Upper Merion Township Building, then located at DeKalb Pike and Allendale Road. The first Mass on the parish grounds was celebrated in the combination rectory and temporary church on May 15, 1955. 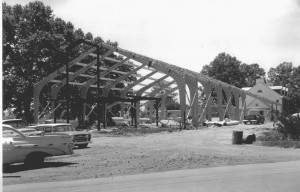 Ground was broken for the new school with a connecting auditorium used temporarily for Sunday Mass on December 11, 1955. A convent to house 12 sisters , Grey Nuns of the Sacred Heart, was also built. MDP School formally opened on October 1, 1956 with 204 students.

The parish grew and received permission from the new Archbishop of Philadelphia, John Cardinal Krol to build a new church. The ground was blessed and construction began on February 18, 1962.

On Monday, December 24, 1962, the first Mass was celebrated in the new Church. 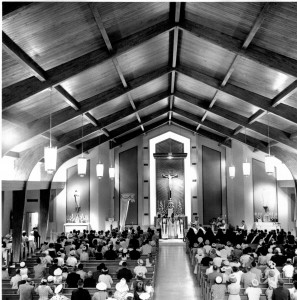 The peak growth period in Upper Merion Township was the 1960’s. Throughout that decade and into the 70’s MDP continued to expand and to grow and so did the number and membership of its organizations.

Father McGrory retired in June, 1973 and was succeeded by Monsignor William McDonough. Under his leadership the CCD program was expanded as were Parish Council and Parish School Board. Monsignor McDonough retired in 1981 because of failing health.

Father Charles Gormley succeeded Monsignor McDonough in 1981. Under Father Gormley’s leadership, the RCIA Program was initiated at MDP. He involved MDP in the King of Prussia Interfaith Council and established the Pastoral Council to develop MDP’s Renewal Program. In June, 1996, Father Gormley was named Pastor Emeritus of MDP.

Father Thomas P. Gaynard was appointed Pastor of MDP in June of 1996. Under his guidance and direction the Renewal Committees implemented a Parish Renewal Program. He provided encouragement and training for those serving in various ministries in the parish. Father Gaynard was actively involved in the work of the Cluster Pastoral Plan for Cluster 71 and was a member of the Implementation Committee. In June of 2001, Father Gaynard became the only priest serving the 5200 member MDP Parish Community, a decision reached by the committee that developed Cluster 71’s Pastoral Plan. After almost 6 years of service to our community, Father Gaynard was born to new life in his heavenly home on March 16, 2002.  We were helped through this difficult time by Reverend Anthony J. Costa, who acted as Parish Administrator until a new pastor was named.

Rev. Msgr. John T. Conway was installed as pastor in September of 2004 and served the parish until June of 2010.   Monsignor Conway was responsible for initiating a Parish Self Study and Survey.  This introspection surfaced a need for additional meeting space, handicapped parking, upgrades to our worship space and rectory.  Monsignor officially announced the “Building on the Foundation” Capital Campaign to the parish in March of 2006.  This campaign funded the  addition of our Parish Center which was dedicated by The Most Reverend Daniel E. Thomas on September 14, 2008.

Rev. Martin T. Cioppi was assigned to our parish on July 12, 2010 and installed on Sunday, September 26, 2010 by Bishop Daniel Thomas, presently the Bishop of Toledo, Ohio.  The parish celebrated Father Cioppi’s installation with a Parish Picnic on that date.    Father Cioppi brings with him a love for the Eucharist and all the Sacraments, a warm desire to serve the parish, and a peaceful spirit.

Father continued the parish plan which included extending spaces for handicapped parking in front of the rectory and the re-pavement of the entire parking lot. With the help of an army of volunteers, Father brought to fruition the Annual Community Carnival which stills raises much needed funds for daily operations.

As Parish Priest, Father’s two goals have been in Worship and Education. He introduced Sung Vespers during the Advent and Lenten Time, the annual visitation of three parishes during the Sacred Triduum. The celebration of Confession every day of Holy Week and the week before Christmas, Devotion to the Sacred Heart and the re-establishment of the Annual Forty Hours Devotion and the parish Mission.

While in Rome, Italy, Father searched for and found the Shrine to the Mother of 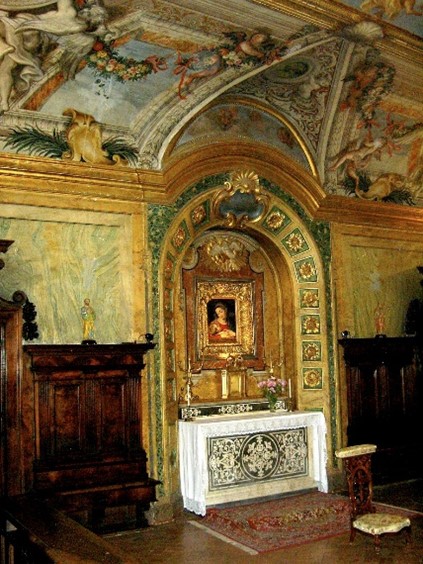 Divine Providence in the Church of San Carlo ai Catinari. He was able to purchase a replica of the painting from the Shrine which now resides on the Marian Shrine in our Church. Several parishioners and visitors have had their prayers answered here with her intercession. Devotions to Mother of Divine Providence are held annually on the Second Weekend of November.

Father, noting the importance of Family-based Religious Education is presently establishing the Family and Youth Center in the old convent. This new center will enhance learning for those families who send their children to government run schools. It will center the catechesis in the home where it rightly belongs. The center will provide resources and support materials for parents, who are the first teachers of the children in the faith.

Father actively supports our parish school. He taught for thirteen years in the Archdiocesan Secondary School System and earned a doctorate in Education from Immaculata University in 2000. Father loves the classroom and even ‘zoom taught’ during the recent pandemic.

During this time, Father Cioppi served for seven years as Dean for Priests in Deanery 6 and Chairperson of the Advisory Council for Catholic Elementary Education in Montgomery County.

Father Kiernan was assigned to us as COVID broke and thank God he came. He took the crisis by the horns and kept the parish informed as to what was happening in the parish, what safety precautions were being observed and really kept us ‘online,’ for the whole shut down. We are all grateful to him for this true act of service in such a desperate time.

The Fathers took to the streets with the Blessed Sacrament with the help of the Knights of Columbus, especially, Carlos Medina and his family.

During the shutdown, we used Facebook and Zoom to hold a daily Rosary, a Holy Hour every Wednesday, Chat with Cioppi Sunday Evenings, daily Mass was live streamed from the priests’ private chapel, and we kept the Church open for daily visitation by extending the hours of visitation from 7am -7pm.

Incredible volunteers showed up every day and then every week to sanitize the whole Church after every Mass. We called them the Cleaning Brigade, under the command of Jen Volpe. They did a great job keeping us safe and still do! We are all grateful for their sacrifice, in appreciation, Father Cioppi gifted each member with a COVID Buster tee shirt.

The KNIGHTS OF COLUMBUS

The role of the Knights in our parish is incredible. Father is so grateful for the hard work and sacrifice these men have contributed in service to the Church in King of Prussia.

Each year the Knights sponsor the parish Christmas show: ETC Christmas! These theatrics bring together young and old parishioners in celebrating in a creative, and sometimes edgy, way the Christmas Season in a heartfelt and familial way. The creators of this annual event are Todd and Emily Cardin. The ETC Christmas Show has become a part of the fabric of our parish and is truly a part of its culture. I am eternally grateful to them both for their sacrifice, love of community and personal friendship.

Father Cioppi attributes the success of his pastoral ministry to the dedication of his staff, the deacons and the parishioners of our parish who are eager to worship God well through the sacraments and are looking for good opportunities to learn more about their faith and serve those in need and poorer than ourselves. They are eager to become true Missionary Disciples

Last year, Father Cioppi wanted to establish a prayer relationship with a cloistered community and found the Monastery of Our Lady of Divine Providence in Lake Elmo.

Since then, Father has established a Novena to Our Lady of Mount Carmel and a Triduum of Saint Therese of the Child Jesus, with the hope that the parish will grow even stronger in faith and prayer, united to the dear sisters of the Carmel.

On May 16, 2021, Father Cioppi celebrated his Fortieth Anniversary as a Priest. He is grateful for all the expressions of love and friendship he received at that time and promised all his support and encouragement with prayers and solicitations to the Mother of Divine Providence.

On July 12, 2022, Father will celebrate being the pastor of MDP for twelve years. He is grateful to Almighty God, Archbishop Perez and to all the people of the parish for this opportunity of grace and he looks forward to even greater things to come.

“For the disciple of Christ, the duty to evangelize is an obligation of Love.” (JPII, Ecclesia in America)