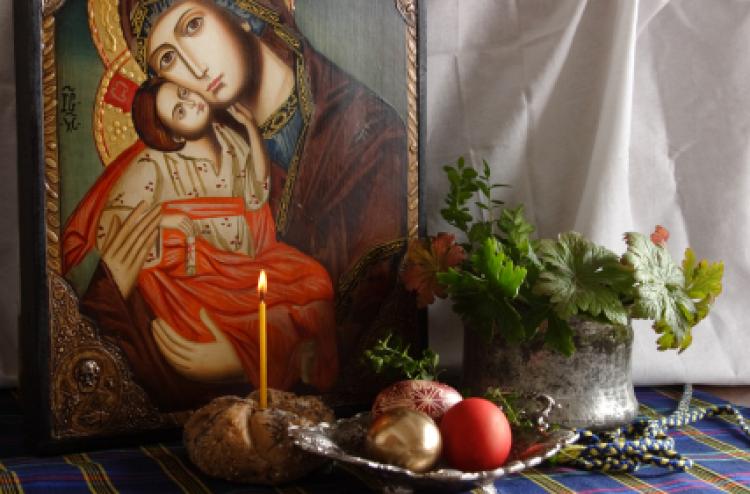 Christos Voskrese!  Voistinu Voskrese!  Those are the first words I remember hearing each Easter morning as a child.   Well, not the first.  The first words were talking with my brothers about the excitement of Easter while we lay in bed waiting for the go ahead to get up.  We talked about what kind of candy we would get in our Easter basket.  And we’d talk about the feast we’d have after Mass: ham, kielbasa, pascha with raisins, kolachi, hrutka and hard boiled eggs.

When I first learned that Easter greeting I’m sure I was too young to understand what it meant that Christ is risen from the dead.  That was many years ago.  My understanding of Easter and its profound implications have deepened over the years.  Hopefully, so has yours.  By Jesus’ passion and death He has paid the price for our sins.  By Jesus’ resurrection He had conquered death and we are no longer held in its clenches.  By Jesus’ resurrection He has ushered in a new kingdom – a new heaven and earth.  We are members in this new kingdom through our baptism into Jesus’ death and resurrection.  We don’t have to live as though this is the only shot at life.  We don’t have to grasp at every pleasure that only brings temporary happiness.  We trust that we will rise with Christ in gloried bodies that do not experience the decay and limitations of our earthly bodies.

Christ is risen from the dead!  By His death He conquered death! And so to those in the graves He granted life!

We profess that Christ is risen, but do we really believe in the resurrection?  We may believe it intellectually, but do we believe it in our hearts?  If we believe in our hearts that Christ is risen from the dead, then we will live our lives radically different than most of the world around us.  We Won’t live as though this is the only shot at life and grasp at every pleasure.   Rather, we will be willing to lay down our life for another because we know we will rise with Jesus when He come again in glory.

In our modern world which focuses on self-gratification instead of self-sacrifice, there are glimmers of hope which illustrate that such radical love is not an ideal that cannot be lived up to, but rather, a choice that we can make with the help of God’s grace.  Consider the events of Friday, March 23, when an ISIS member attacked a supermarket in France.  He murdered 2 people and wounded many others before coming to a standoff with police.  One of the police was a 44 year old Catholic man who was human with imperfections like you and me.  He was civilly married but was soon to be married in the Church.  The policeman persuaded the gunman to take him to the place of a female hostage.  Several hours later, he was stabbed and shot.  He died the next day.  The priest who anointed the policeman before he died, knew him well as he had been preparing the policeman and his fiancé for marriage for over two years.   This is what the priest had to say about the fallen policeman:  “it seems to me that only his faith can explain the madness of this sacrifice which is, today, the admiration of all.  He knew, as Jesus told us, that “There is no greater love than to give one’s life for one’s friends”.  He knew that if his life began to belong to Marielle, it was also to God, to France, to his brothers in danger of death.   I believe that only a Christina faith animated by charity could ask for this superhuman sacrifice.”

My sisters and brothers, this is what true belief in Christ’s resurrection looks like.  It enables us to live radically different because we know that this life is not the end.  There is an new and resurrected life awaiting us in the new heavens and new earth!  While most of us won’t find ourselves in the same situation as this French policeman, we are all called to offer up our lives for one another in simpler ways.   Maybe it’s helping your parents who re making a great sacrifices so that you can attend a better school.  Maybe it’s taking time to visit someone who is shut-in and has very little contact with other people.  Or maybe it’s making a personal sacrifice so that a child in a third world country can have something as basic as clean drinking water.  There are always opportunities for us to offer up at least part of our lives for someone, knowing that we share in Jesus’ resurrection.  An in a few minutes we will come forward to receive Jesus’ Body, Blood, Soul and Divinity which strengthens and enables us to offer our life for another.

Over the years the obligatory Easter greeting, that I disliked as a child, has increasingly become my favorite.  It’s a direct profession of what Easter is all about.  And it is a reminder to me that if I really believe in the resurrection I must constantly strive to have self-sacrifice replace self-gratification.   And so instead of Happy Easter, I proclaim to you, “CHRIST IS RISEN!” To which we believers respond, “INDEED HE IS RISEN!”