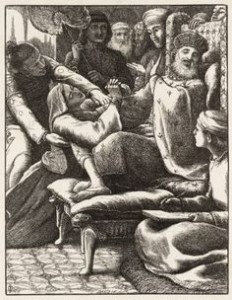 This past week I have received calls of anxiety from people over this election. People seem to be trapped in a never-ending reality show from which there is no escape.

Somehow our political life has come unhinged from a certain nobility and the virtues of statesmanship established by our founding fathers.

What we are experiencing only adds fuel to a fire of polarization that began with an attempt to define when human life begins. Added to this is our culture’s desire, to free itself from the responsibilities of organized religion and separate faith from reason.  We are truly in a desperate place.

The entire history of mankind tells the story of the tragic effects of man alienating himself from God. The first victims of course are always the poor and the vulnerable but once they are destroyed, family life becomes the next target. We lose our sense of virtue and cling to vices that will enslave us to anxiety, fear, ignorance and spiritual poverty. When mans’ inhumanity to man becomes unrestricted, as we have seen in the last century, the results are horrific.

But we cannot be surprised by this calamity. As we sit silently here, we in fact mirror, in the world, a communal stance which is silent using the excuse that ‘religion is a private matter.’ And so our silence could open the doors to euthanasia, endorse the loss of faith and reason and could lay the groundwork for juridical and political corruption.

As the world we have created for ourselves gets smaller and smaller and our lives get more narrow and more silent, fear, anxiety and inner pain grows. We are in fact less free because we have hidden our light under a bushel basket.

“There was a judge in a certain town who neither feared God nor respected any human being.”

When we are silent, people who disguise themselves as ‘faithful but dissenting’ Catholics, speak for us. They damage our faith because they are not telling the truth about Christ or our belief in Him. One begins to wonder “when the Son of Man comes, will He find faith on earth?”

Look where our silence has gotten us thus far: people still hate Catholics; treat us with contempt, consider us backward, stupid or politically incorrect.

But, my friends, we are not a people of gloom or desperation! We remain not enlightened but rather illuminated by Grace. We are a people of great hope because the Word of God is living and effective in our lives and can be for others if they listen. Our little community is becoming an island of faith, hope and charity towards which the lost and the confused will eventually be attracted.

Today a boy was canonized a saint:

José Sánchez del Río was born in Mexico. At the outbreak of the so-called “Cristero War” in 1926, his brothers and he joined the rebel forces fighting the violent anti-Christian regime which had been established in the country.

Catholicism flourished in his hometown because their priests secretly remained throughout the persecution and never abandoned the faithful, clandestinely celebrating the Eucharist and administrating the sacraments, at which young José assiduously participated. In those years, children were taught the history of the first Christian martyrs and many young people were attracted to their heroic lives.

During a violent battle on 25 January 1928, José was captured and imprisoned in the parish church which had already been desecrated and laid waste by federalists. It was suggested that he escape in order to avoid being sentenced to death, but he refused.

While in prison, in an effort to make José renounce his faith to save himself, he was tortured and forced to watch the hanging of another boy who had been imprisoned with him.

The soles of his feet were flayed and José was made to walk to the cemetery where, positioned in front of the grave prepared for him, he was shot, but not mortally. He was asked again to renounce the faith. But José, with every shot inflicted, cried out: “Long live Christ the King! Long live our Lady of Guadalupe!” In the end he was executed. It was 10 February1928, and he was almost fifteen years old. On his dead body was found a letter he had written to his mother in which he writes, “I promise that in heaven I will prepare a place for all of you. Your Jose dies defending the Catholic faith for the love of Christ the King and Our Lady of Guadalupe.”

We have the moral authority to preach, to announce because of Jose’s blood, to stand up not for what is easy but for what is right. I can stand here every Sunday and preach, but St. Paul today is not talking just to me, he is talking to you!

“Remain faithful to what you have learned and believed because you know from whom you have learned it.” The Scriptures are not self-revelations, they are given us by the Apostles; the Church. From here Paul charges you in the presence of God and of Christ to “proclaim the word; be persistent whether it is convenient or inconvenient; convince, reprimand, encourage through all patience and teaching.”

Because you have been baptized, you have become signs of contradiction in the world. This is who we are and we are supported by a long tradition of teaching and proclaiming from times harder times than these.

We are lifted up and will be lifted up by the martyrs of long ago and our own martyrs who dare to shed their blood for the Truth, and the right to be truly free in Christ.

The Gospel begs us to “pray always without becoming weary.”

So, I am going to suggest to you three things that have helped me settle down and see things a little more rationally and calmly:

Believe me, my three suggestions have helped me get through this time tremendously.

Remember, it doesn’t have to be this way. You have the power of Christ, in word and sacrament, to change things and the way we do things; you always did.

The motto of the Christero movement to which Jose Rio belonged was: Long live Christ the King! Christo Rey! Christ reigns because He is the only King; the only power that can save us, the only life worth living!