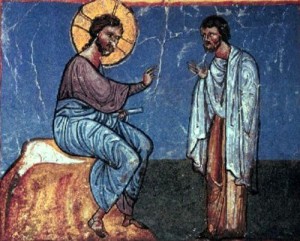 Today a young man of our parish wishes to be fully initiated into the Church as a Catholic. He is willing to open his heart to the gifts which will soon be called down upon him in order that he might be able to produce good fruit for the sake of souls in the world; for the sake of manifesting the Kingdom of God on earth, among us and within us: Charity, Joy, Peace, Patience, Kindness, Goodness, Generosity, Gentleness, Faithfulness, Modesty, Self-Control and Chastity.

It will take courage to be such a man, a true defender of the faith, a true preacher of the Gospel in a heathen world. And for this the Holy Spirit will descend on our brother and give him Wisdom, Understanding, Counsel, Fortitude,Knowledge, Piety and Fear of God.

These gifts, according to Aquinas, are “habits” provided by God as supernatural helps to man in the process of his “perfection.” They enable man to transcend the limitations of human reason and human nature and participate in the very life of God, as Christ promised (John 14:23).

Aquinas insisted that they are necessary for man’s salvation, which he cannot achieve on his own. ‘The virtue of charity is the key that unlocks the potential power of the seven gifts, which can (and will) lie dormant in the soul after baptism unless acted upon.’

And so, the two greatest commandments come alive in us as we practice with great enthusiasm the virtue of Charity among the poor, the ignorant and the needy.

There was a famous Russian dancer of the late twentieth century named Rudolph Nureyev. He was passionate about his craft and quite notorious at times about his behavior.

In his book The Nureyev Image, Alexander Bland describes Nureyev’s love for dance in these words: “For its sake he fought and sweated, suffered, quarreled, insulted and born insults, schemed, dreamed and made bitter sacrifices. Dance took priority in his life over everything and everyone else; his loyalty to it was unquestioning. It was both the means of his living and its end.”

Wow. Could you image if he had channeled even some of that energy and passion into a love for God; if he had prioritized his life in service of Christ in the Church? He could have moved mountains.

This, challenges our own passions and our own true desires. Do our priorities in life reflect our final goal? Is the Lord, our God alone or are there other gods before Him?Think about what you do every day, every week. You too have the power to move mountains. Activate those gifts of the Holy Spirit within you by Acts of Charity.

If you do, you will not be far from the Kingdom of Heaven.