NOTE:  click on the pictures to view them “full screen”, then click the back button to return to the story. 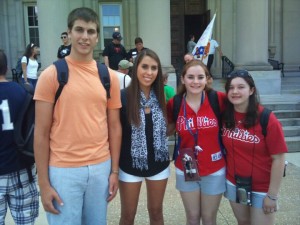 This past August, Mother of Divine Providence Parish sent four pilgrims to attend World Youth Day in Madrid, Spain. This trip was made possible through the fundraising efforts of our pilgrims, supported by their families, and thanks to the generosity of our parishioners.  Our pilgrims were:  Ashley Hopson, Madison Hopson, Mary Caitlin Dugary and Brian Dugary.

Brian shares the following story about their pilgrimage: 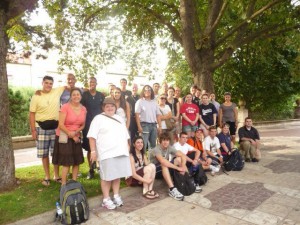 “Our World Youth Day Pilgrimage lasted almost a full two weeks, and took us through Portugal, France, and Spain.  We travelled with a larger group of Catholics from Philadelphia, which included Father Richard J. Smith and Auxiliary Bishop Michael J. Fitzgerald.

World Youth Day is an event organized by the Pope himself in an effort to bring young Catholics from around the world into one celebration of our faith; for the youth to be immersed in a sea of cultures, tied together by our common thread of Catholicism. We were able to meet young people from all over the world.  Dozens of different countries were represented in the population: Sweden, Argentina, Russia, France, Australia, Italy, South Korea, Syria, Polynesia, Peru, Germany, and many more. 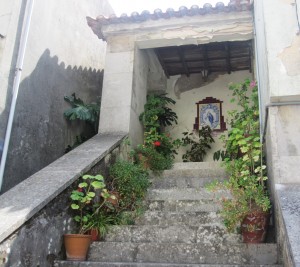 We initially flew in to Lisbon, Portugal, where we toured the city, and subsequently travelled to our first pilgrim destination: Fatima. In Fatima, we witnessed the location of the miraculous Marian apparition that occurred so many years ago in that small town. We were able to see the homes of the children whom Mary chose to reveal herself, and in the evening participate in a candlelight vigil, with prayers said in various languages. 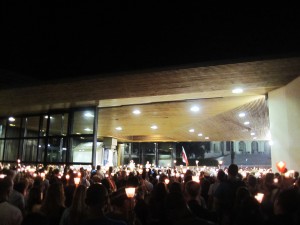 We travelled mostly by bus, and made our way from Portugal through Spain towards Lourdes, France via the former Spanish capital of Burgos and the Pyrenees mountains. 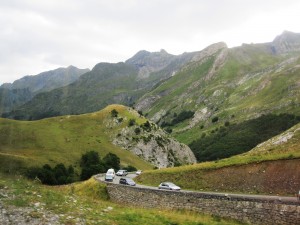 During these days we had numerous opportunities for Mass, prayer, reflection and reconciliation. 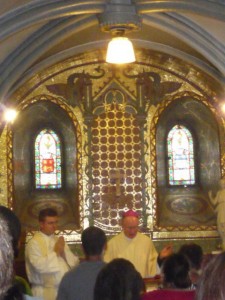 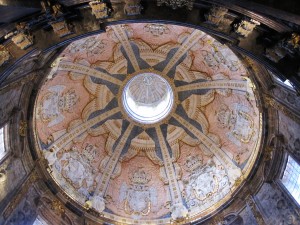 After a short visit to Loyola, we arrived in Lourdes: the quaint French mountain town where Saint Bernadette experienced her Marian apparitions. We had the opportunity to bathe in the waters of the grotto, walk the way of the cross, and see the magnificent Basilica: its walls lined with hundreds of plaques commemorating healings attributed to Our Lady of Lourdes. On our second and final night in Lourdes, we participated in the largest candle light vigil of the trip; a truly beautiful service. From that point, we were en route to Madrid, where we would eventually rendezvous with the Pope. 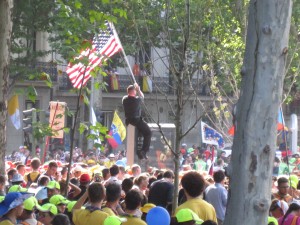 We stayed in the host city, Madrid, for almost a week. In the Spanish capital, we began to truly experience the scale of this awesome event. As we walked through the streets, the population was virtually a cultural melting pot from around the globe. One could hear shouts of “Esta es la juventud  del  Papa!” : “This is the Pope’s youth!” or “Viva el Papa!” Young people greeted each other in their respective native languages or even made efforts to communicate beyond their normal language barriers. Pilgrims traded small items, flags, and trinkets with their foreign counterparts.

Throughout the week, activities varied; from informative guided tours of important landmarks, to group prayer or prayerful reflection individually, to screenings of films and open forums related to issues of our faith. 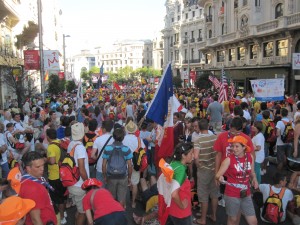 There were more things to do than could possibly be done!  Saturday evening the pilgrims processed through Madrid to a large airfield: Cuatro Vientos, which means “four winds”. 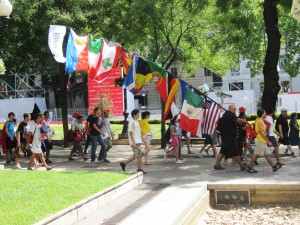 At this place the pilgrims celebrated with Eucharistic Adoration through the night.  On Sunday, the final event of World Youth Day consisted of a Mass celebrated by Pope Benedict XVI. There a large crowd gathered, numbering over a million, all gathered to see “El Papa.” 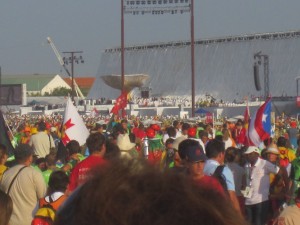 There, we all witnessed the Vicar of Christ celebrate Mass for the youth. 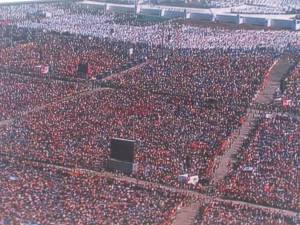 It was an amazing week of retreat, reflection, and spiritual growth. Throughout the pilgrimage, our youth carried with them the intentions of our parish and the whole Diocese of Philadelphia. Our representation in this global event was a once in a lifetime experience, and I hope that our parish might consider sponsoring more young people for World Youth Day in the future! 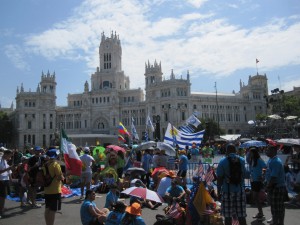 We are truly grateful for the opportunity to emerse ourselves in this magnificent experience!  We feel strengthened in our faith for witnessing such a powerful event.”