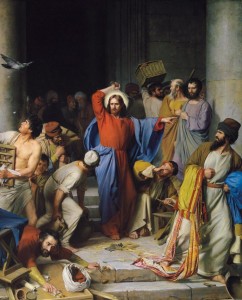 There was a cartoon years ago called ‘Calvin and Hobbes,’ about a precocious little boy, Calvin and his playmate, a talking tiger. One day the Hobbes, the tiger, finds Calvin sitting under a sign that reads, ‘kick in the butt for one dollar.’

Hobbes asks, “How’s business?” Calvin replies, ‘Awful! And I don’t know why, because so many people need a good kick in the butt!’ Jesus finds Himself in a similar situation then and now. Spiritual Sloth can creep up on us every slowing and very powerfully.

John Paul II, in his work, Love and Responsibility, said, “The fact is that attaining or realizing a higher value demands a greater effort of will. So, in order to spare ourselves the effort, to excuse our failure to obtain this value, we minimize its significance, deny it the respect which it deserves, even see it as in some way evil, even though objectivity requires us to recognize that it is good. Resentment possesses as you see the distinctive characteristics of the cardinal sin called sloth. St Thomas defines sloth (acedia) as ‘a sadness arising from the fact that the good is difficult’.”

Symptoms of sloth or spiritual laziness might include, not fully participating at Mass; not singing or responding or actively listening, arriving habitually late for Mass and anxiety over leaving early; taking short cuts in prayer, or abandoning them all together. Making up excuses why we cannot activate our Faith in Jesus by reaching out to those who are poorer than ourselves. Becoming too busy to go to confession or practice our devotional life.

The remedy of course is diligence; being determined to live up to what we profess and honoring our baptismal commitment. “There is actually one thing worse than evil itself, and that is indifference to evil.” J. Fletcher