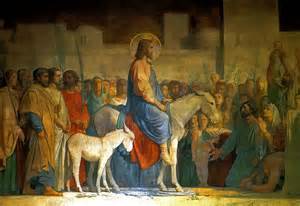 We are obsessed with reality TV…shows like Keeping Up with the Kardashians, Dancing with the Stars, Survivor, and the like.  There’s another series known as “Undercover Boss”. It features a company’s founder or senior executive who temporarily gives up his or her power and authority to become an entry-level employee at the bottom rung of the ladder.  The “boss” goes “undercover” to investigate what’s really going on in their company so that they can improve the business and reward hard-working employees. They are not tyrants…they’re sincerely interested in the welfare of their business and their workers.   They’re on the road away from home and spend time agonizing about how to solve the problems of the companies.   At some point the undercover boss returns to the workforce and reveals their identity.  The exceptional workers are rewarded for their efforts and are given the financial means to help make their dreams come true.

On this Palm Sunday, the beginning of the week we call “Holy”, the readings speak to us of a somewhat similar figure, but one who offers us infinitely more than any reality TV show or personality.

How can we allow this Jesus to become a greater reality in our lives this Holy Week and beyond?  First, by going to confession and stamping out evil in our lives, we participate in Jesus’ action of crushing the head of the serpent and defeating Satan.  Second, by spending an hour with Jesus in the Blessed Sacrament on Holy Thursday evening into Good Friday, we stay aware with and accompany Jesus during His agony in the garden.  Third, by attending the celebrations of the Triduum – Holy Thursday, Good Friday, and the Easter Vigil – we participate in Jesus’ passion, death and resurrection.

My sisters and brothers, let’s turn off the reality TV shows this Holy Week and enter more deeply into the ultimate reality…Jesus’ victory over sin and death.