At first glance, there seems to be a dichotomy between the lives of Martha and Mary. Which is best path to heaven, prayer or service? 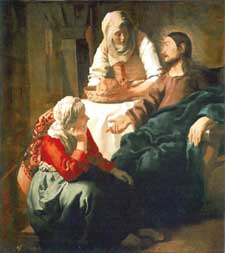 There is a story about a young Benedictine who was confused by his order’s motto: Work and Prayer. So he went for counsel from his Abbot. The Abbot invited the monk to row across the lake with him.

The Abbot rowed first, but with one oar only. As a result, the boat went in circles, round and round, getting nowhere.

The monk, looking rather confused, grabbed the other oar and began to row in sink with the abbot, explaining: “Abbot you have to use two oars to get anywhere.” The abbot smiled and said, “yes, the right oar is prayer and the left oar is work, unless you use them together, you just go in circles.”

How do we row across the lake of our life, with one or two oars?