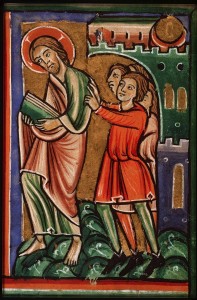 Chiara Lubich in 1943 founded a movement in Italy called (Hearth) “Focolare.” She spread her message of unity in the crucified and abandoned Christ around the world. A few years ago, she gave in Rome, an insightful meditation on the state of the world:

Humanity suffers from deafness, she said.  It can no longer hear the Word of God through speech because there is too much noise in the world. Parents and children are too busy to listen to Christ’s message. They have no time to listen for ways to heaven. They no longer hear the sounds of people crying or suffering even in their own homes.

We have to admit that our attention span becomes shorter every time we tune in to social media, TV News networks, and the like. So much information we can hardly grasp it all. Silence is becoming something we fear, because we feel alone and empty in quiet.

The people of Nazareth were confronted with the truth about Jesus. They became angry because they were afraid of the change Jesus was effecting in people. Christ is offering us hope, if we can trust the authority God has given Him.

Christians can still see and touch and feel – so perhaps the best way today to teach Jesus is for you and me to become better witnesses to the Gospel, more obviously willing to express our own encounters with Christ.

But we cannot be afraid to allow Christ to move in us around us and through us!

For those who recognize themselves as imitators of Christ, though imperfect ones; and for those who are willing to accept the Cross in His Name, Chiara Lubich says: they become, for the mute-words; for the doubtful, the answer; for the blind, light; for the deaf, voice; for the weary, rest; for the desperate, hope; for the alienated, unity; for the restless, peace.

How do we do this? Listen; and in the quiet He commands for you, and in the memory He has given you, you will hear the words: “Love is patient, love is kind. It is not jealous, it is not rude. Love never fails. These words are nearer to you than your own breath. You know them; you only have to live them, joyfully!