We were blessed to have a number of our parishioners, as well as our pastor, involved with the World Meeting of Families Congress held in Philadelphia in late September.  In addition, we received a block of tickets to both the Festival of Families and the Papal Mass.   These were distributed on a first come, first served basis to those requesting the tickets. 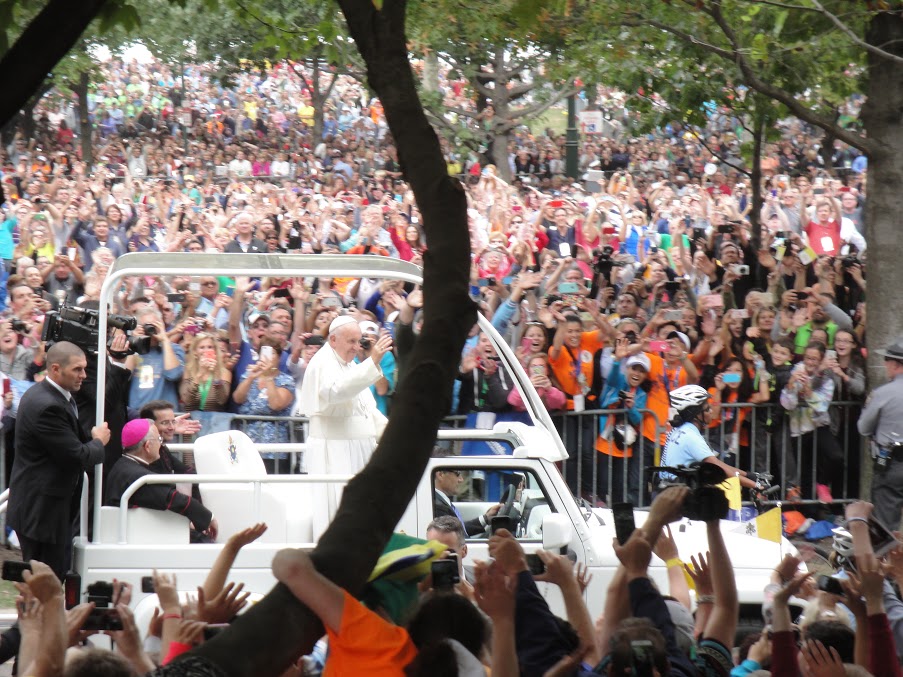 We are happy to share some of the stories and photos taken during this most historic event for our Archdiocese and parish community.

Submitted by Jennifer Derry:  “We had an absolutely incredible experience in Philadelphia for the papal visit, and are so very grateful to MDP for providing us with tickets.  We were joined by our goddaughter and niece, Antonia, who is 15, and Anthony’s mom, Mary, both of whom flew in from Illinois for the weekend, as well as Jen’s parents Mary and Ed who drive in from York, PA.   Jen’s brother Tim, a captain in the USAF, currently stationed at McGuire AFB, met us in the city with his family too.  The photo is of all of us with a cardboard cutout of Pope Francis — and when we posted this photo on social media, everyone thought we had *actually* met the pope himself!   We were beyond blessed to be in the presence of the Holy Father that weekend, but we most certainly did not quite get this close!! 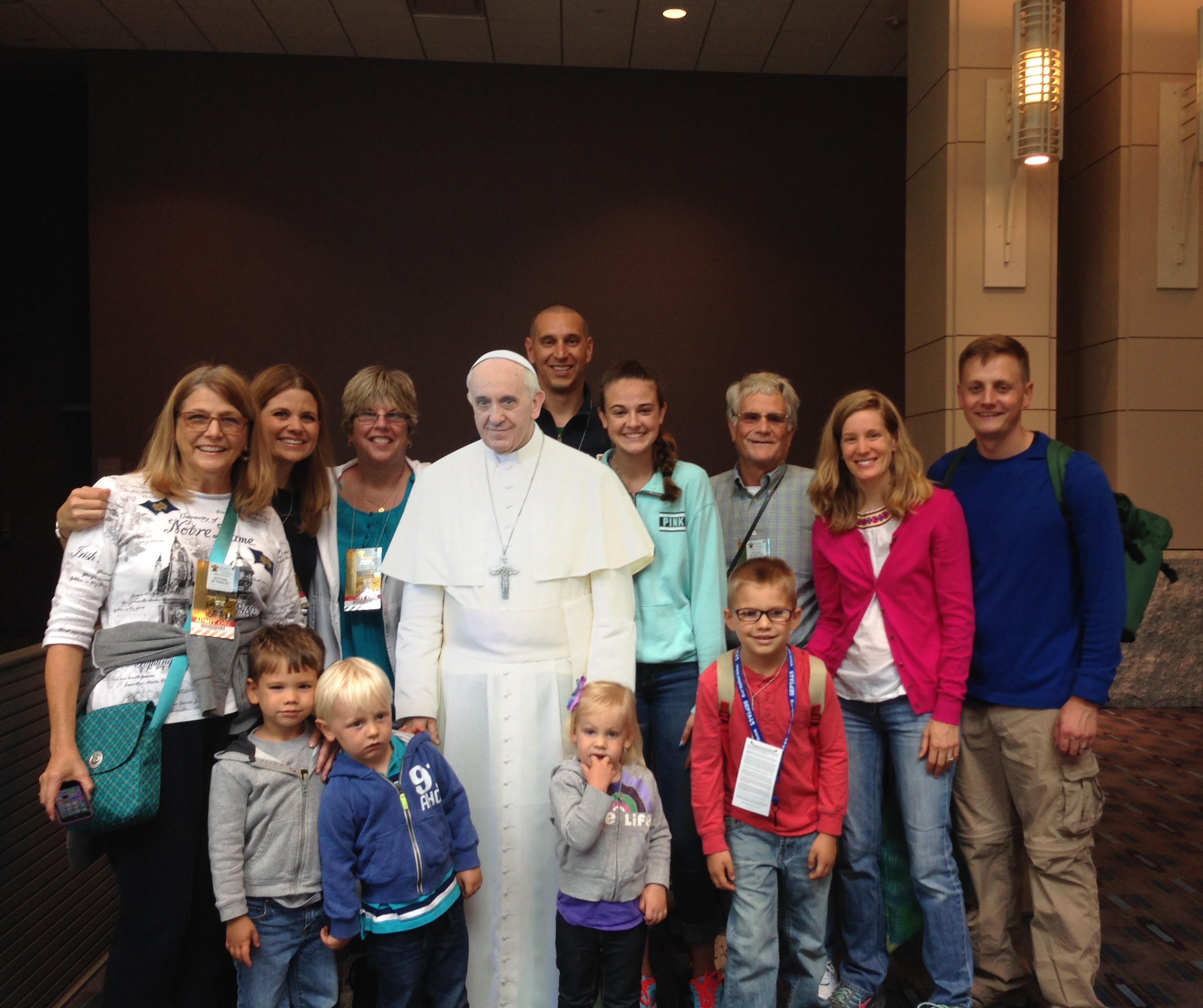 Event in a sea of tens of thousands of people, we somehow found the Medina family on the Ben Franklin Parkway and spent both Saturday and Sunday together.  It was a beautiful weekend of family and fellowship, and we feel so fortunate to have been part of it.  Young and old, rich and poor, of many faiths, races, backgrounds, and experiences, for all over the country and all over the world…all joined together to hear the Pope’s message of love and peace.   That sense of community – that we are truly all part of God’s family – is something we will never, ever forget.

Submitted by Maureen Maskarinec, wife of MDP Deacon Greg Maskarinec:  {I was standing outside of the Cathedral at} the Mass for clergy and religious and special invitees…Greg was inside.  I chanted and cheered with the crowd and prayed along with the Mass on the jumbo-tron.  It was very exciting, I’m so fortunate to have been able to be there among the Pilgrims.

From the World Meeting of Families to the Final Blessing at the Papal Mass it was a wonderful time full of grace.   I saw the people who traveled from Argentina and spoke a few words with them.  To see Father Jim Martin in the crowd and other famous people I watch and listen to on Catholic radio or EWTN was so neat.  God is good!  Being in the crowd waiting for and listening to the Holy Father, his love of the young, poor, the sick, the elderly, was like being at the Sermon on the Mount.  God is love.  I’m still living in the glory and light! 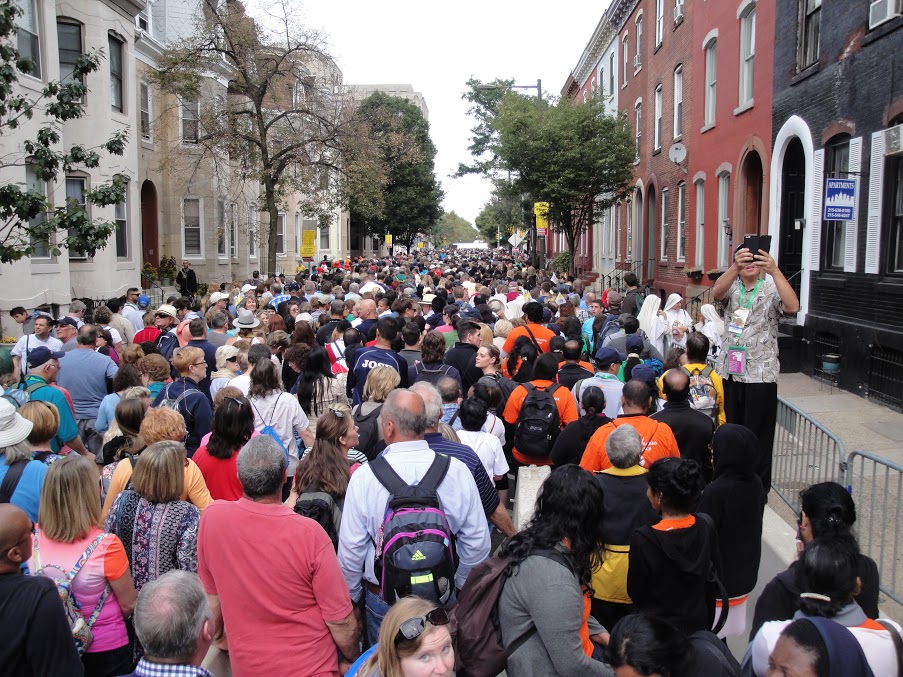 Submitted by Mark Kriner:  The most moving part of the Pope’s visit for us was a hero priest how gave out Communion to the crowd.

My wife and I bicycled down the Schuylkill River Trail on that Sunday to attend the Papal Mass.  Due to the huge throng and our arrival only half an hour before  the Mass was to begin, we were only able to wedge ourselves into the crowd in front of the Fairmount ball field, across the Parkway from Eakins Oval.  We couldn’t see the altar due to some temporary grandstands, but we did have a fair view of one of the large TV screens.  Plus we were within thirty feet of the roadway, close enough to see the Pope’s broad smile as he rode by on his Jeep/Popemobile.

We wondered on the plans to distribute the Host to such a multitude.  Thoughts of loaves and fishes meandered through our heads as the Mass progressed.  When the time came, we watched the yellow and white umbrellas spread out along the Parkway, signifying the locations of distributing priests.   We joined an impromptu queue that aimed at one of the umbrellas.  But the line stalled after a few minutes, within mere yards of the roadway.  It seems to many in the front rows were determined not to give up their spots.  It seemed logical.  The Pope came in, he had to go out.  They had prime viewing positions and the spirit of the moment was unfortunately not enough to dislodge them.  Dejectedly, we accepted that we weren’t going to receive Communion. 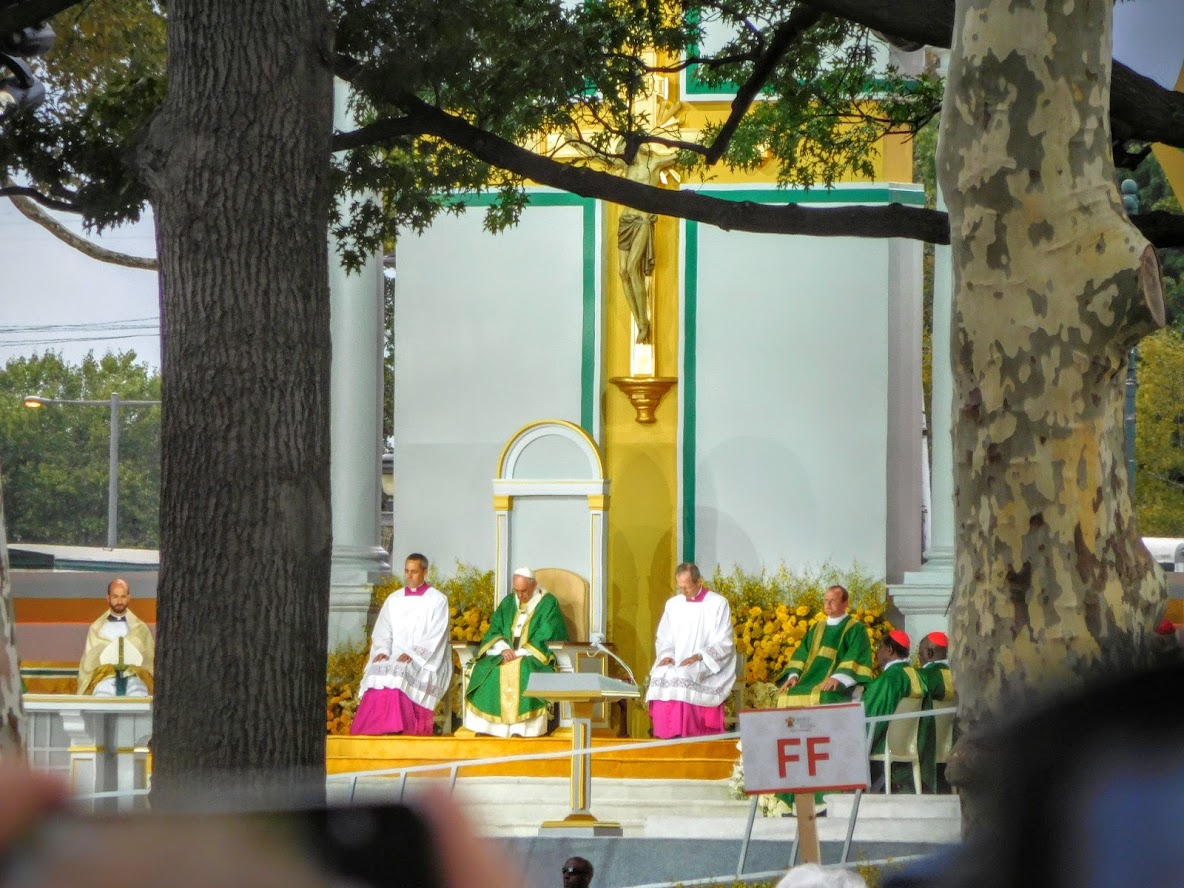 We decided to make our way towards the exit points when we found ourselves against a double line of temporary fencing.   Out of nowhere a lone priest with a chalice full of Hosts came up to the first barricade.  The crowd ion the immediate vicinity clamored for him to serve them.  Two bystanders tried to unhook the fence to allow the priest to pass through, but they were unsuccessful.   Quickly on of the security personnel intercepted him and stated that he was not allow to cross the barriers.  The priest pointed towards the altar and brushed aside the guards objections with a classic line, “Talk to the man in white!”  He then distributed the Host to all those he could reach, including me and my wife4. We also overheard him give instructions to an aide to go fetch more priests to come here, to the very heart of the crowds.   Once we had received Communion we quickly moved away to allow others to take our place.

By the time we had left the secure perimeter and hand unchained our bikes, we each marveled to the other over the heroics of that one priest.  He moved us with his action, making the Mass all the more meaningful.   We’ll never forget it.

Submitted by John Popek:  I won’t forget the number of people all in the one place waiting to see the Pope and participate in the Mass.   I trusted SEPTA to get me to Philadelphia, but did not trust it to get me out.   So I biked in on the Schuylkill River Trail from Norristown.  The National Guard was stationed on the trail, but they closed it at Girard Avenue and directed all bike traffic up Brewery Hill to Spring Garden Street.  The trip was about 20 miles each way.  Security on the north side of the event only took about 30 minutes to clear, so I was fortunate to get on the Parkway by 3:15 pm.  I was on the right hand side of the altar with a clear view of the Mass and several Jumbo-trons.  I hope the messages the Pope delivered in Washington, DC, New York and Philadelphia are remembered long after his historic visit.

Submitted by Dolores McFadden:  The people in the picture before the Mass are myself, daughter Maryanne and her son Liam, and daughter Emily.  My husband, Francis and son-in-law Bill also attended Mass.

The atmosphere prior to Mass was exciting and friendly; fellow worshipers were considerate.  The singing at Mass was beautiful.  We all felt blessed being there.

Prior to the start of Mass I recognized Father Cioppi on the altar, guiding bishops and priests to their positions.

There was no obstruction when the Pope passed us prior to Mass.  I don’t have the words to describe the experience. 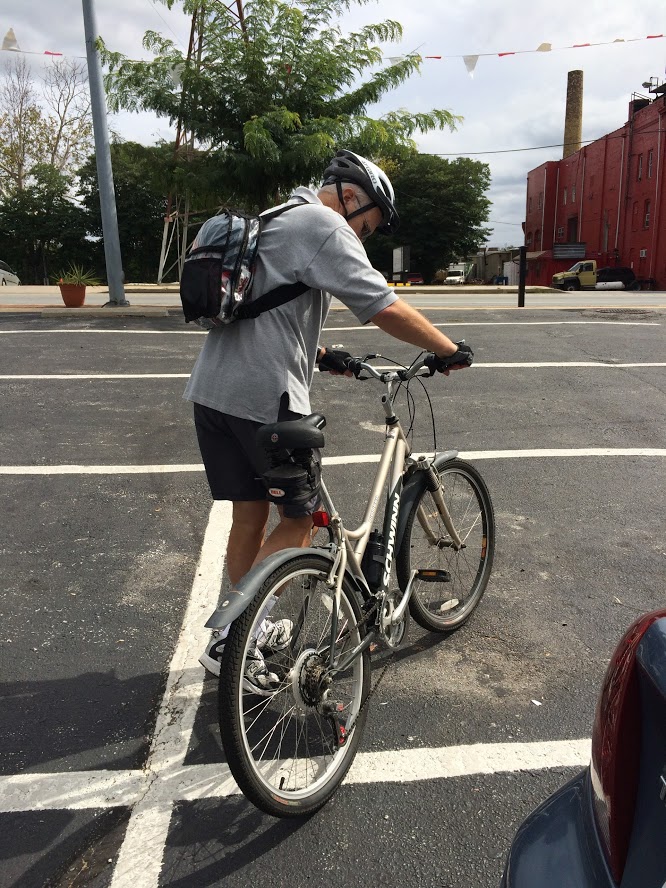 Submitted by Barb Albert:  I was blessed to be able to attend the Papal events with my husband and two of my sisters.  My niece invited us to use her apartment and MDP provided tickets to both the Festival and the Mass!

We arrived early Friday morning and went immediately to the “Mary Undoer of Knots” Grotto which I had heard so much about.  It was so inspiring to see al the prayers that were being presented to Mary.  When we finished tying our knots, we felt hopeful and peaceful.  As we were leaving we saw everyone pointed to the sky and there was a beautiful rainbow in the sky directly above the Grotto – even though it had not rained for days! 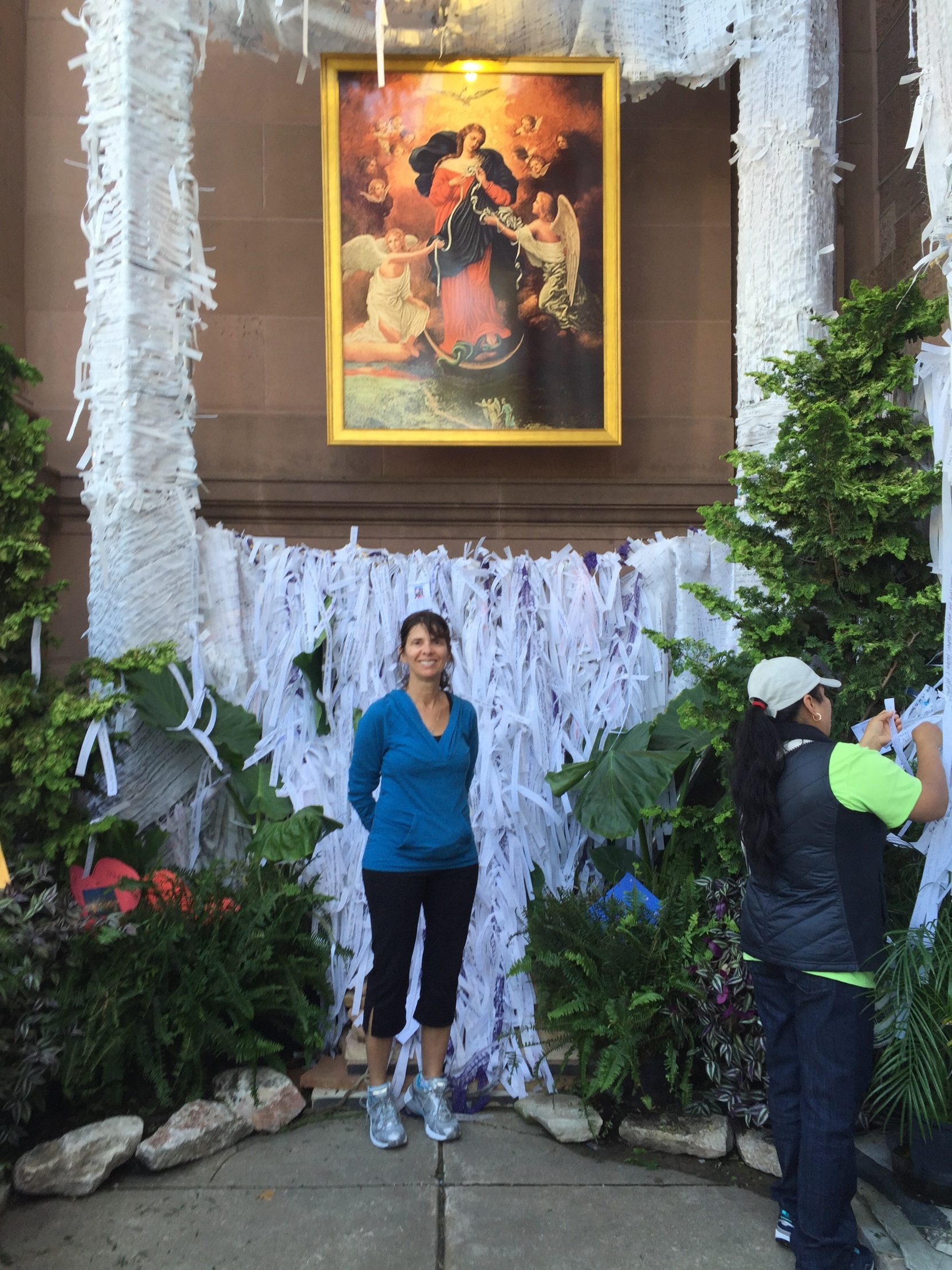 The next day there was another rainbow over the Basilica while Pope Francis said Mass.  Coincidence….I think “Knot!” 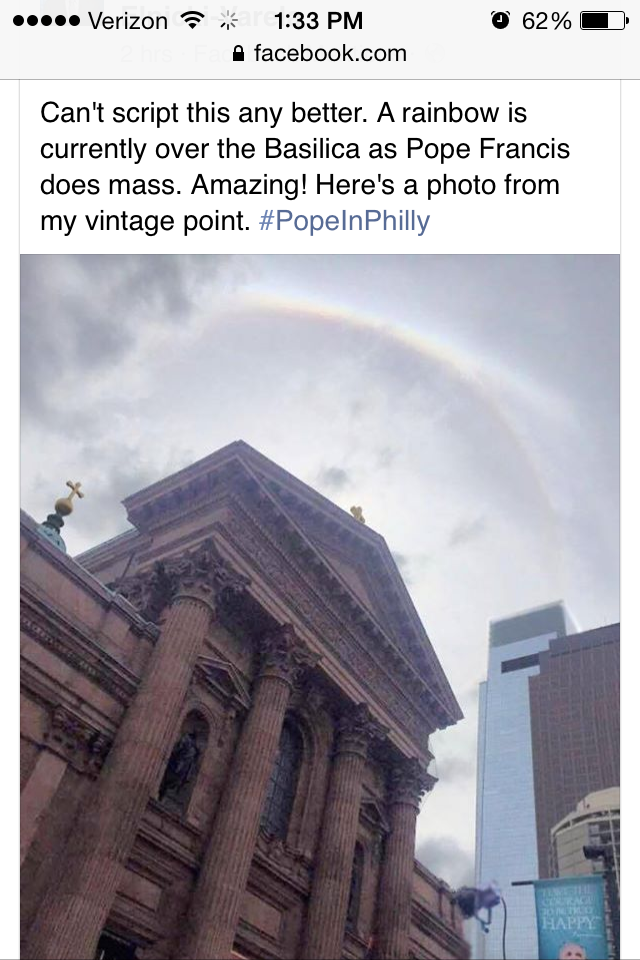 Submitted by Lauren Joyce – MDP Director of Religious Education:  I was blessed to be able to attend “everything” – the entire World Meeting of Families and also the Festival of Families and Papal Mass!   The joy of the entire week was incredible.  From walking into a room at the World Meeting of Families full of thousands of Catholics passionate about building up marriage and family life, to seeing all sorts of Catholic leaders and celebrities (did you know that Fr. Cioppi got to shake the hand of Bishop Robert Barron?!?), to seeing hundreds upon hundreds of priests and religious (not to mention families with small children!) from all parts of the world – it was truly a universal celebration of our faith!

I especially enjoyed some of the programming aimed for parish leaders and young adults – “Club Francis” put on by the Office for Vocations brought together young adults with professed religious from several different orders to share dinner and friendly conversation.  It was so interesting to meet sisters from Nebraska, or priests from Vietnam!  The Culture Project brought in several amazing speakers on marriage and life issues – Jason and Crystalina Evert, Lila Rose, Matt Fradd, and more.   To see all of these people whose lives are dedicated to bringing the Good News of Marriage and Family Life to all parts of our wounded culture was so encouraging!  We are not alone in this mission of love, and we have the blessing of God and the prayers of the Holy Father to encourage us! 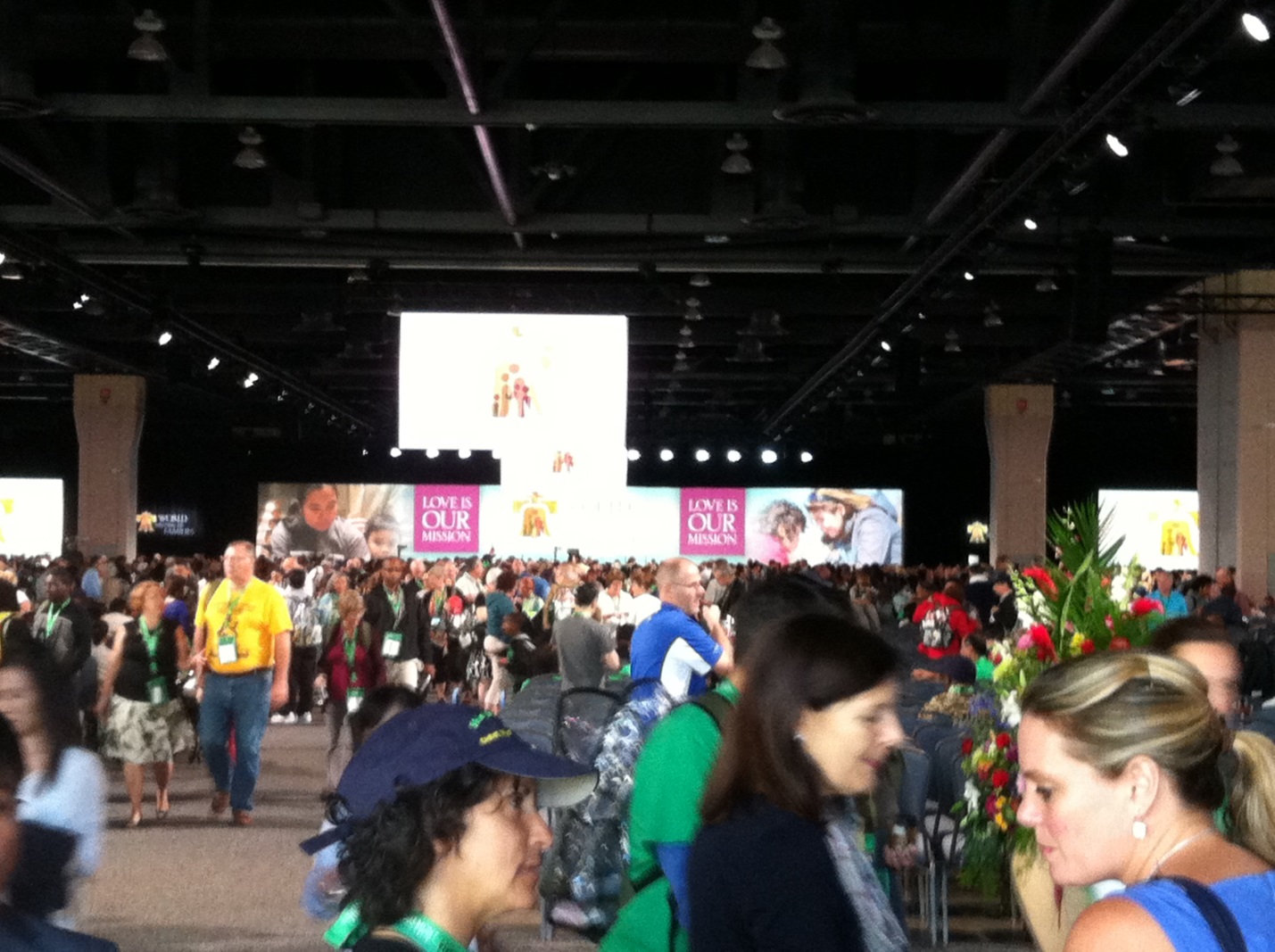 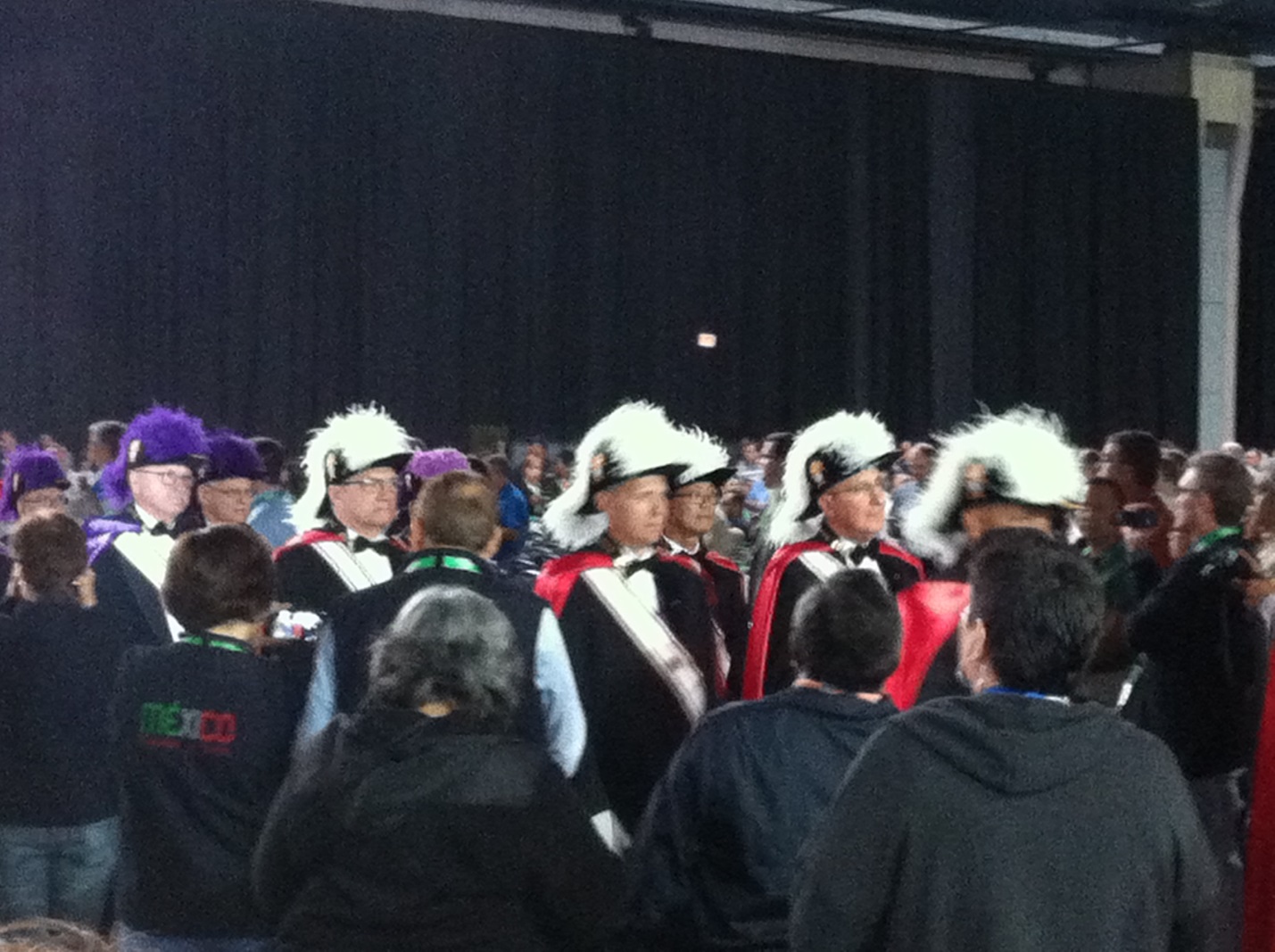