As we come together to pray on the eve of the March  for Life, I would like to look back to the prophetic document of Paul VI, On Human Life, and in that light, acknowledge the rapid collapse of the human family, but also the great hope given to us by Christ Who makes all things new! 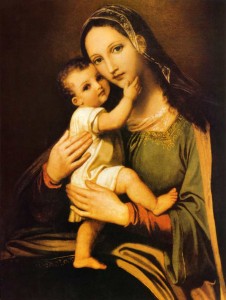 Paul VI addresses the question of human procreation, which touches the purpose and nature of human life. The human person involves more than science or statistics. It involves the whole person, body and soul, who is called to reflect God Himself.

Certainly, we can ignore the need to be a integral person, blaming our busyness and distractions for the problems we encounter, but we cannot avoid the natural consequences of our ignorance that hinder the nurturing of a life in holy communion with Christ.

The social and cultural crisis we face today centers on our coming abandonment of true married love and on our growing inability to relate to one another with a love that is centered in the life and sacrifice of Jesus.

Marriage is an institution of God to fulfill His Plan for our salvation. As a consequence, husband and wife, through mutual sacrifice, and a maturing in their life together, cooperate with God in the conception and rearing of children.

Without God as the core of the family, human life will disintegrate along with its dignity. As our society continues to separate itself from God, even in our public discourse, Paul VI predicted a growing marital infidelity and a general lowering of moral standards that leads to a greater false tolerance of self-indulgence in a cruder, less human and more angry public sphere.

All of us are aware of how far human nature can be isolated from God. We are just now coming to understand the dangers this isolation brings to the young who are overly exposed to temptation, bombarded with useless information, noise and busyness. These are all distractions that will isolate them from the nurturing family we try so hard to create. Our children need new and more creative incentives to keep the moral law, and participate in a family that has God and marital love at its core.

It is an evil thing to make it easy for children not to choose Christ.

Another issue which has become common place in our society even among fellow Christians and contributes to the further isolation of the human heart is the use of contraceptives which isolate the marital act from God and leads to a lesser reverence for a spouse as the image of Christ; reducing the Act to a means of personal satisfaction rather than elevating it as the sacred bond it is. When we isolate God, we forget true love.

Finally, the Pope warned against giving to a state the power to regulate marital life, which is the heart of every human family. “We run the risk of having an amoral authority intervening in the most personal and intimate responsibility of husband and wife,” he said.

Just this past Monday, we were promised a more active disintegration of marriage and a continuance of the culture of death whose tenets arrogantly defy natural life as God created it.

We continue to hear of Catholic hospitals and universities where administrators separate themselves from the Bishops and gloss over moral discernment in an attempt to become more secular, more ‘sensitive’ to the culture of death or more falsely ‘tolerant’ of other opinions rather than a true respect for them. This has led to the taking of more innocent life and the acceptance of more inhuman acts toward human dignity.

What is more tragic for us as Christians is our tendency to ignore the progress of this alienation and pretend it will all go away; that somehow people will get a hold of themselves and start behaving more Christian, more polite, more human. Our silence gives consent and the Truth remains the Truth. When we reject the dignity of human life, we reject Christ and cannot claim to be in full communion with Him.

My dear friends, all around us we see the effects of our cultural attempt to separate God and Man; denying the sanctity of human life, on streets, in our work and in the market. What happens there affects us all. It influences our families, our spouses and our children.

Paul VI wrote these things in the late sixties and he has proved prophetic for us today. He recognized that within this great human suffering would emerge a great longing for holiness. People will begin in their deserted, lonely and alienated lives to appreciate the need for grace and real human love.

These are dangerous times; they are also times of great hope based in the faith we profess here before God.  We are the unashamed believers in Christ. We believe in the Church as Christ Who teaches through our Archbishop. We believe in true human freedom, and in the right of all people to live and pursue the mission God has given them to complete.

We have each other and we have Christ in the Sacraments. It will not be easy, but it will be the right thing to do. So we believe, so we must act!