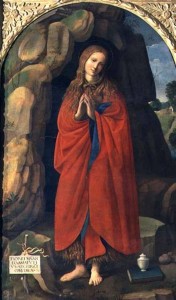 Saint Mary Magdalene died during the first century. She was the disciple who was healed of possession. She stood with Mary at the foot of the cross and after having encountering the risen Lord, announced to the disciples His resurrection.

Mary is that singular figure in our history who encounters Christ so intimately that, as tradition holds, she went into the desert as a hermit to embrace the life of the wilderness like the Baptist.

Jeremiah says so wondrously, “I remember the devotion of your youth, how you loved me as a bride, following me in the desert,
in a land unsown.”

In her final loneliness, Mary shares with us her communion with God, reminding us of Its vitality not only in our practice of religion but also in the cultural consequences of our belief; that God is not dead, He has been raised.