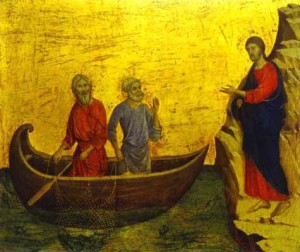 In the second reading this morning, Paul summarizes the good news, which he first brought to the Corinthians. It was not news which he had invented but news rather which had first been delivered to him, and it was the news of the risen Lord. It was something that the Corinthians had received. No one ever invented the gospel and in a sense no one ever discovers it on his own. It is something one receives from another.

An old Church Father once wrote: “No one can have God as Father unless he has the Church for his mother.” The Gospel is, the Word received and communicated through fellowship. In the Gospel Peter receives the command of Jesus to ‘go out into the deep and let down your nets for a catch.’ With faith in the person of Jesus, Peter acts on that word and we witness the results of his faith – from now on, you will be catching men!

What was the defining moment in our life when we accepted Jesus in faith? What did He do or say that changed our lives? Our faith is not something in the past but it is something that is now and solely directed to the future. You will be fishers of men!

My brothers and sisters, Jesus is calling us soon in the Lenten season to listen more deeply and then respond more effectively to His word. He is anxious for us to play an active part in the Church and, we here who take His Body and Blood who receive and respond to His word should be ready to go out and fish again and again until the Kingdom is complete. This is not my work alone; it is our work together.