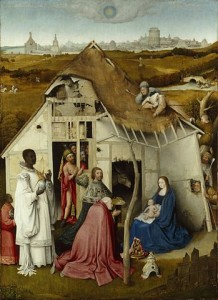 Since the beginning of Advent, we have become like the Magi, searching for the promised One who changes our lives and the life of history. Matthew says, “And on entering the house they saw the child with Mary his mother. They prostrated themselves and did him homage.” (Mt 2: 11).

Outwardly, their journey was over. It seemed as though they had reached their goal.

However, at this point a new journey began for them, an inner pilgrimage which in fact does change their lives. These men were not expecting to see a child. They were expecting to see a man, a King! They were coming from a world of chaos looking for peace! What they found was a vulnerable Child lying in a manger offering ways to peace.

They had to change their ideas about God and about human beings, and in doing so; they had to change themselves. They had to see that God’s power is not like that of the world. God’s ways are not as we imagine them or as we might wish them to be. This is where the wise men’s inner journey begins.

God contrasts the noisy and pretentious power of the world with the defenseless power of love, which submits to death on the Cross and is born ever new throughout history. This love connects each of us to the divine, and ushers in the Kingdom of God.

They can no longer ask how does God serve me. Instead, they will have to ask how I can serve God. They must learn to lose their life in order to find it.

God has given us many good examples of what it means to be a faithful disciple. The Magi from the East are just the first in a long procession of men, women and children who for thousands of years have searched for the God and lived lives of heroic virtue in spite of persecution.

Look around you, there are living witnesses among us today who can teach us about God’s power to love and to forgive.

Dear friends, let us approach this mystery like the Magi with sacred silence and divine humility, for as Isaiah says: “Rise up in splendor, Jerusalem! Your light has come, the glory of the Lord shines upon you. See, darkness covers the earth, and thick clouds cover the peoples; but upon you the Lord shines, and over you appears His glory.”