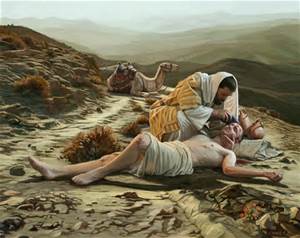 There’s a true story about an 18 year old American boy who fought in World War II.   One day his unit was engaged in close combat with the Germans.  The American soldier came around the corner of a building and found himself eye-to-eye with a German Soldier.  The had their rifles pointed at one another, both ready to pull the trigger.   The American soldier later recalled that in the stare down he realized that this German soldier was just like him, a young boy.  He realized that the “enemy” was not some monster, but a human being just like him.  The young American sensed that the same thoughts were going through the young German’s mind.  The young soldiers turned away from each other, their hearts filled with mercy!  A mercy that is rarely displayed nor expected in war.

This true story of these young soldiers is a powerful illustration of the dignity due to every person since, without expectation, we are all created in the image and likeness of God.  Each and every one of us has the right to be treated with dignity and a responsibility to treat others with dignity.  Deep down we know this to be true, right?  We know that to live our neighbor as our self is, as Moses said in the First Reading, “something near to us and already in our hearts.  We have only to carry it out.”

Turning to today’s Gospel, the scholar of the Law also knew that we are called to love our neighbor as ourselves, even if that neighbor is our enemy.  In this parable of the Good Samaritan the man who fell victim to robbers was a Jew.  The expectation was that the priest and Levite would minister to their Jewish brother.  But they passed to the other side of the road.  Being faithful to the letter of the Law by avoiding contact with the bloodied wounds of their brother was more important to the priest and the Levite than being merciful and attending to his need.  Along came a Samaritan…one who was looked down upon by the Jews as his enemy, but as a fellow human being created in the image and likeness of God, just like himself.  He goes above and beyond what would be expected, even from a fellow Jew.  Unlike the priest and the Levite, the Samaritan’s heart was filled with mercy!

The importance of recognizing the dignity of another is something that is written in our hearts, but how do we move from feeling to action…from sympathy for another to an act of mercy?  It isn’t always easy, especially when mercy is called for someone for whom we don’t like, for someone who has deeply offended us, or for someone whom we feel is not deserving of our mercy.  Can you think of anyone in your life who this might apply to?  The difficulty in moving from sympathy to mercy can be eased by recognizing the mercy that God has first showed us.

Close your eyes for a moment…picture yourself in the person of the victim in today’s Gospel.   You lay at the side of the road, beaten, robbed of your possessions,  stripped of your dignity and left for dead.  Many people walk by, but no one stops to help you, not even your brothers.  Then along comes Jesus…whose mercy you do not deserve because of your sins.  But Jesus stoops down and pours oil and wine over your wounds and heals you in the sacraments.  Jesus picks you us and carries you to the Church where you will be loved and cared for.  Jesus pays the price of His life for you to have a room in the inn…the kingdom of heaven.  Yes, God looks upon you and His heart is filled with mercy.  God looks upon each and every one of us and His heart is filled with mercy!

On this 15th Sunday of Ordinary Time we find ourselves a little more than half way through the Jubilee of Mercy.  A year in which the Church calls us to enter more deeply into the mystery of God’s mercy for us.  A Mystery that is often beyond our comprehension because of our inability to stop by the side of the road and attend to our neighbor in need.  A brother or sister who is created in the image and likeness of God, just like we are, and worthy of dignity.  But this Jubilee Year is filled with opportunities for God’s grace that will enable us to move from sympathy to mercy.  These opportunities are found in passing through the Doors of Mercy in our Archdiocese and throughout the world during this Jubilee Year.  God’s grace can also be found by passing through the doors of the confessional.  Allowing ourselves to experience God’s mercy will fill our hearts with mercy and give us the grace to see the divine image and likeness of God in others, to put down our weapons, and to look upon our neighbors, and even our enemies, with love.