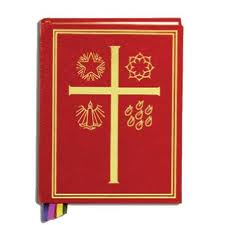 Living the truth God revealed to us through his Son Jesus Christ requires not only the gift of faith, but also the courage to profess it.

Several years ago in the jungle along the Columbia / Venezuela border, a priest was getting ready to celebrate Sunday morning Mass. Just before it began several armed insurgents burst into the chapel demanding to know who in the congregation believed that Jesus Christ was his savior.  Petrified about what might happen next, no one said a word. After a long silence a man came forward and said “I believe.” He was seized by the soldiers and dragged outside along with five others who professed their belief in Our Lord.  A minute later the sound of machine gun fire broke the quiet of the morning air.
The leader of the insurgents came back inside the chapel and ordered the priest and remaining congregation to follow him outside. As they rounded the corner of the chapel they saw the six men they thought had been executed just standing there. Turning toward the priest, the leader of the revolutionaries pointed toward the six men and said: “Father, here is your true congregation.  Take them back inside and continue your Mass.”  Then he told everyone else to leave and not to return until they knew what it means to have faith in God.

I’m not sure just how much of this story is true.  It certainly illustrates the message found in each of today’s readings.  True faith requires people to make “hard choices” that clearly demonstrate what they believe.  What Joshua told the Israelites 28 centuries ago still applies to you and me today.  He said: “If it does not please you to serve the Lord, decide today whom you will serve!” In other words: We need to make a choice – and be ready to accept the consequences of what we choose.

The choice we make will either acknowledge the ultimate goodness of God or place some other “thing” ahead of him in our life. That “thing” may be prestige or power; possessions, sex, vanity or maybe just thoughtless apathy. Be careful choosing, Jesus tells us: For it’s the spirit that gives life, not the flesh.

Living the truth of our faith is hard work and like some of the early disciples, not everyone can accept it.  Why?  Because faith is exactly what we proclaim it to be – a mystery!  Like all mysteries, we come to know the truth of our faith by how God reveals himself and His will to us.  God and the truth are made known to us with certainty by observing the world he created; using the power of human reason; and listening to his Son.

In Jesus, God gives us the ability to know the truth and, by his grace, accept it in Faith.  Sometimes that means accepting the truth that doesn’t fit our concept of what it should be.  The truth about the world and mankind is established by God — not us.  Having faith is more than just empty words and saying “I believe.” The truth is what it is – received from God in its entirety. Having faith means we can’t pick and choose what to believe and leave the rest behind.

When Jesus asked his disciples, “What if you were to see the Son of Man ascending to heaven?” he was really asking them if they would believe it if they saw it? At the ascension, was that “truth” any harder or easier to believe than any other truth God has revealed to us?

Let me ask you a question. If armed men burst in here right now and challenged you to profess your faith, what would you tell them?  Could you say with conviction that you believe:

–      The Blessed Sacrament is the body, blood, soul and divinity of Jesus Christ or do
you believe it is only ritualized bread and wine?

–      Would you tell everyone that God alone is the giver of life, which begins at conception,
or would you say it is up to the individual to determine when life begins?

–      Would you acknowledge that marriage is a sacred bond between a man and woman which is permanent, faithful and ordered to the procreation of children, or would you say that it is time for us to redefine marriage to better fit the social morés of today?

Like the early disciples, many people will find the teachings of the Church hard to accept and will no longer acknowledge what God has revealed to us as truth.   You know, believing some but not all of the truth, and saying you still have Faith, is like the old cliché  of being only a little bit pregnant…it just doesn’t work that way. Real Faith requires us to trust God and his apostles, our bishops, and to believe and live the truth he has revealed to us even if it’s not what we want it to be.  That’s why as human beings we need to pray, “I believe Lord, help my unbelief.”

Today when you pray the Creed and say “I believe in God…” do it with the conviction of faith and believe Jesus when he said: “The words I have spoken to you are Spirit and life.”

This week also think about the question Peter asked Jesus: “Master, to whom shall we go?”

And if your faith is strong enough to believe in the truth revealed by God, then profess that belief in the choices you make and by the actions of your life.